Crowdfunding board games: how to run a successful campaign

Crowdfunding board games (or Tabletop games as they call them on the other side of the pond) has been in the last few years one of the most popular routes to bring them to market. And it’s no secret that I love board games. I can’t wait to run my first campaign in this space! In fact, I’m in talks with a little company that might launch their first game through crowdfunding!

As I have commented previously, to this date I have run two rewards-based crowdfunding campaigns for a brewery and a community café. And although the principles to run any crowdfunding campaign are the same, each category has its own peculiarities. In preparation for that upcoming campaign, I did a bit of research digging deep into the Internet and visiting the UK Games Expo. This is what I learnt.

Crowdfunding board games is popular and very competitive

The Kickstarter stats show how the category of games is (at the time of writing): 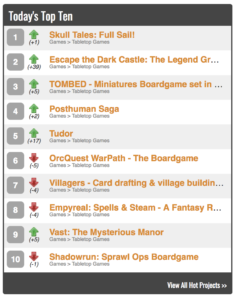 Very impressive indeed! There is clearly an audience eager to back the next hit in this area. And talking to the creators testing their games in the UK Games Expo, every single one of them mentioned Kickstarter as their way to launch!

But it’s not all good news. With so many projects active at any time, it’s a very competitive category, with a success rate of only 36.47%. That means that only one in three projects launched gets funded…

Jamey Stegmaier quitted Kickstarter after a string of 8 successful Tabletop games campaigns, culminating with Scythe, that raised $1.8m and is currently in 7th place at the overall Board Game Geek table. He lists his reasons in his amazing blog, and are mainly related to the amount of time it takes, the relationship with the distributors and the emotional toll – crowdfunding is not easy!

Ignacy Trzewiczek seems to be following an opposite path. He has published incredibly successful games like Stronghold and Robinson Crusoe with his company Portal without the help of crowdfunding and following the traditional route through distributors.

During the recent UK Games Show, I asked him about his approach. And surprisingly he told me he regretted ‘not having paid enough attention’. After all, 2017 was quite a mad year for crowdfunding:

There are two main types of successful campaigns:

In the early days, just the fact that you were crowdfunding was newsworthy. The platforms were not as crowded and it was easier to notice new, interesting projects. Not so easy now! You really need to bring your crowd to the platform. And either go for a steady campaign that will hit 30% on the first few days and the objective on the last few ones or (ideally) go for a ‘big bang’.

Here are some tips:

Don’t get caught up in delivering your rewards!

The Internet is full of horror stories of campaigns unable to deliver their rewards on time, creators going AWOL, low-quality pieces… One famous case is ‘HeroQuest 25th Anniversary‘ (link in Spanish) that after two failed launches in 2014 due to copyright issues, went on to raise 680,000€. And as of today, the rewards are still to be delivered!

Again, the key here is planning carefully your manufacturing and rewards shipments. For the right project, backers will be happy to wait for their rewards.

So be conservative and don’t disappoint your backers. And it’s always better shipping before estimate dates than after. Especially if you have the next point in mind…

Once you have a successful campaign, you can tap into the same audience again and again

Successful game developers have a nearly ‘cult’ status. Ignacy from Portal joked about how he fills suitcases with cookies that he takes back to his native Poland. And, as we’ve seen with Jamey Stegmaier, he’s become an expert in crowdfunding board games. He’s done 8 successful campaigns!

Once you have a following, and it doesn’t need to be as big as the one of the creators above, your fans are going to expect you to release at least a game a year. And that community will be the first to back your new game. Result! Just don’t disappoint them along the way…

Crowdfunding board games. Wrapping it up

Board games is one of the most popular categories of rewards-based crowdfunding campaigns. It has become the standard way of launching independent games, but the overall success rate is low. Building a community and planning your campaign carefully is key to increase the chances of success.

We use cookies to ensure that we give you the best experience on our website. If you continue to use this site we will assume that you are happy with it.Ok