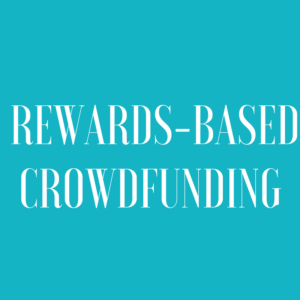 Following my previous post in which we discussed the definition, history and types of crowdfunding, let’s dig a bit deeper into perhaps the most common variant: the rewards-based crowdfunding.

Rewards-based crowdfunding offers a product or service in return for the money pledged to the project.

Running a crowdfunding campaign, even if it’s not successful, has a lot of benefits. Let’s take a look at the main ones:

Usually, rewards-based crowdfunding campaigns are run through a platform that, in exchange for their bespoke tools, will charge the successful projects a fee. This fee is usually 5% of the funds raised for the platform plus a payment fee up to 3% (usually Stripe). You should take into account these fees when planning your campaign! There are countless platforms, here are the most popular ones:

Kickstarter: it’s the biggest and perhaps most known platform. Based in the US, they launched in 2009 and they have raised, at the time of writing, over $3.67 bn. It’s a very ‘pure’ platform, only allowing ‘all-or-nothing’ campaigns. The success rate, defined as the number of projects funded divided by the number of projects launched, is of 36.11%.

Cultural categories (‘Music’ and ‘Film & Video’) are the ones that have completed most successful raises. However, ‘Games’ is the one that has the biggest number of campaigns raising over $1m, followed closely by ‘Technology’. If you are like me and like stats, they have quite a comprehensive page with real-time open metrics.

Indiegogo: the second biggest platform is slightly more opaque with their stats, but an article at Fast Company quoted $1.5bn raised since their launch in 2008. Unlike Kickstarter, Indiegogo allows to keep the money you raise (what they call ‘Flexible funding’). Therefore, the success rate is not comparable.

Crowdfunder.co.uk: the reference platform in the UK, it has raised over £40m since its launch in 2014. With a big community of over 600,000 members, it has a social and community focus. Partnering up with companies such as Santander, Virgin and multiple local councils, they have multiple plans to match-fund the money raised in a project. For example, a project I run with The Merstham Mix received £10,000 from the Santander Changemaker fund. It allows both ‘all-or-nothing’ and ‘keep what you raise’ projects.

Patreon: this platform is designed around recurrent donations that allows content creators to monetise their videos, blog articles, music and even software developments. Launched in 2013, it has become the reference in the sector. A quick look at Graphteon, a site that tracks the performance of the campaigns in the platform, showcases how powerful this form of crowdfunding can be. Many creators are making a full time living thanks to it!

Types of products and services that crowdfund well

There are many types of products and services that crowdfund well. Many people have in mind bands funding tours (Marillion) and records (like Amanda Palmer, who raised over $1m before having recorded anything!) through crowdfunding. But also many other categories do well:

What is the common thread? All these campaigns are addressing a problem in an innovative way. ‘How’ they’re doing it is more important than ‘what’.

Based on his incredible experience, my friend Valentí Acconcia has collected the 20 golden rules of crowdfunding (in Spanish). A few of them relate to rewards and that if applied correctly produce the best results for a crowdfunding campaign. Here they are:

It’s important to note that,  rewards-based crowdfunding campaigns are considered ‘online sales’ both from a legal point of view and in the eyes of the taxman. Therefore they are, in the UK, subject to VAT and corporate tax. Depending on the legal structure of the company raising funds, this will have different implications, so talk to an expert to avoid getting caught on the backfoot!

If you want to dig deeper, in this article, I discuss 3 keys for a successful rewards-based crowdfunding campaign.

And please throw my way any questions you might have about crowdfunding by commenting on the article or through my contact form.

We use cookies to ensure that we give you the best experience on our website. If you continue to use this site we will assume that you are happy with it.Ok