10 things to consider for your community crowdfunding project

In a recent post, I wrote about what I’d learned running my first crowdfunding campaign. Well, I’ve since run another one and, as you might imagine, have learned much more. This time, it was all about community crowdfunding.

A bit of background

To give you a bit of background, in November 2017 we opened a community café in one of the most deprived areas in Surrey, Merstham estate. The café is called The Merstham Mix and our objectives are to serve healthy food at very affordable prices for the local community. We also want to tackle the huge food waste problem. So, partnering up with FareShare, we’re able to offer the special of the day at just £2! 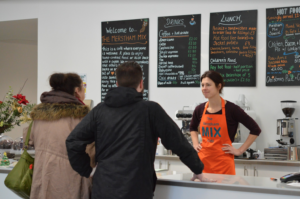 The objective of the crowdfunding campaign was to raise funds to extend our opening hours and launch cookery courses to cook on a budget. We wanted to do more than just provide short-term help and with the courses, we’ll be addressing one of the root causes of food poverty. We could have gone the route of grant applications (and to a certain degree, we did). But we knew, from my experience with Crumbs Brewing, that a rewards-based crowdfunding campaign has many other advantages. And we wanted to benefit from them!

We launched the campaign on crowdfunder.co.uk on the 28th of February. The campaign closed on the 31st of March. With the help of the crowd and the Santander Changemaker fund, we raised £20,217. And even once we’d closed, we still received over £500 offline… amazing!

10 things to consider for your community crowdfunding project

So, without further ado, here are the things you should consider for your community crowdfunding project:

Running a community crowdfunding campaign is not easy. There are a lot of variables to control and a lot of stakeholders to manage. On the other hand, it’s well worth it, not only for the money but for all the other benefits discussed. It definitely pays off getting advice from people that have gone through the experience.

So, if you want me to give you a hand with your project, please don’t hesitate to drop me a line on my Contact form